Meatless Somedays: The Breakfast of Super-heroes

Hello, and happy Sunday morning to you!

This morning I want to write about my new breakfast of choice: steel-cut oats. That’s right, I’m rolling back the rolled oats another step and kickin’ it old-school with the classic cereal that can be enjoyed both hot and cold. But I’ll take a few minutes to talk about oats in general.

When an oat seed is picked, it has this hard outer shell that makes it practically inedible. The first thing they do to make oats fit for human consumption is to remove this hull and what remains are referred to as whole oats or groats, which still retain the fiber- and nutrient-rich bran and germ layers. At this point, they have to dry the grains in a kiln so that they don’t go rancid. After that step, oats will store for a long time in cool, dry conditions. When the oats are run through a machine that chops each grain into three or four pieces, what comes out the other side are steel-cut oats – or groats, if you prefer (I don’t like the sound of it.)

Let’s take that a step further; When the steel-cut oats are steamed for a few minutes and passed under rollers, we have what we know as “quick-cooking rolled oats.” The “old fashioned” or “jumbo” rolled oats are actually steamed and rolled whole oats. They’re virtually the same thing, except for size and thickness of the flakes. Both of them, having been steamed prior to rolling, have been partially cooked and so have lost a bit of their nutritional content via processing. Instant oatmeal, the kind that generally comes in paper packets, has been steamed even longer and rolled even thinner. In my opinion, instant oatmeal is ruined the moment it has been made and is little better than junk food. But these processes do make them easier to prepare; rolled oats can be poured into a bowl with milk and eaten right away, or they can be cooked in just a few minutes.

Since cooking often results in nutrient loss, I prefer to make cold cereal; it’s just as delicious and – bonus – you don’t stand a chance of burning your palate with hot lava oatmeal. When I started looking into steel-cut oats, I realized right away the implications of their lack of processing: when they’re bought in the bulk section of the grocery store, where you actually dump them into a bag from a hopper, the only processing steps these oats should have gone through is the kilning and the cutting. Again, the kilning is completely necessary if you want the oats to keep for more than a few days after hulling them, plus it gives the oats a slightly nutty flavor (I like to generalize this flavor as “delicious”) because it roasts them a little, like nuts. The cutting isn’t necessary, but it’s not removing nutrition either, so I’m okay with that.

These things don’t cook quickly, however. In scouring Google for information, I saw a lot of commentary about the fact that it takes about half an hour to cook steel-cut oats. This makes sense scientifically, since once the oat has been rolled, its effective surface area is so much larger that it cooks quickly, whereas the unrolled oat has those surfaces hidden in its very substance, which must be penetrated by the liquid. I did eat a single dry, steel-cut oat, however, and it won’t break your teeth, like one guy said; they’re actually fairly soft for being hard. Unfortunately, if they don’t cook quickly, then they don’t soften quickly in liquid. Unlike the rolled oats, just pouring milk on steel-cut oats and eating them like that is like swallowing a whole peanut – you’re likely to get the least benefit out of it this way, unless your idea of benefit is hiding microfilm in whole peanuts and then retrieving them the next day.

I have better things to do in the morning than cook oats, so I’ve taken to soaking my oats overnight, or longer. Most bloggers recommend a 4-to-1 ratio of liquid to steel-cut oats, often saying that you should adjust the liquid to taste. Needless to say, I have. I like to keep a pretty precise control of the consistency of my oats and I have found that a 1-to-1 ratio, using liquid and dry measuring cups where appropriate (there is a difference, in case you don’t realize,) is sufficient to produce a good, thick oatmeal for making cereal. Soaking them for at least 24 hours makes them even better, but overnight is good enough. If you make multiple servings at once, you can keep them in the fridge for at least a few days, so you’ll find out if you do it that way. Last night, I soaked a dry cup of oats in a liquid cup of unsweetened vanilla almond milk and it came out exactly how I wanted it to. Remember, you can always add more milk, but taking it out is more trouble than it’s worth.

I could eat them like that, but I don’t. I take a bowl and put in about a half cup of Honey-nut Cheerios. I add a sprinkling each of sliced almonds, walnut pieces, and sunflower kernels, a tablespoon of chia seed, and then I blanket that with ground cinnamon. I stir all the dry stuff together, and then I spoon out the oatmeal on top of it; I typically use what starts out as 1/2 cup of dry oats, which I think is two servings. I add some more almond milk (this is where you adjust your liquid to taste) and stir up the works, and I add some fresh or unfrozen fruit. We keep grapes, blueberries, strawberries, and the like in the fridge for a few days, then we wash and freeze them so they don’t go bad on us. To unfreeze, I’ll throw what I want in a custard cup and bathe them in cold water for a few minutes, rinse, and throw them in the cereal and mix it once more, gently, to get my final product.

See the photo below of this morning’s feast. I used pepitas instead of sunflower kernels because they’ve been there for a while and I want to make them disappear; and they did disappear, into my belly! I realized halfway through the bowl what was missing: the fruit. Dang! I just ate the fruit after I finished the cereal; I’m shameless like that. 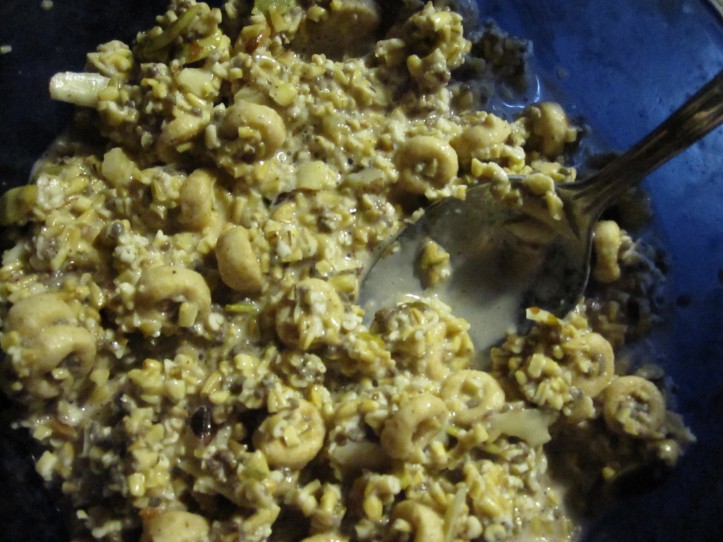 As always, feel free to comment, let me know if you try it – if you have any relevant comments whatsoever, leave them in the comments below. Until next time, stay happy and healthy, and have fun with your life!