I’m going to make this quick. There’s a very small chance that I might get to run yet this morning, and I’m going to see if I can make that happen.

Last night, I did Meatless Monday; per my previous post, we had moved Meatless Sunday to accommodate a busy weekend. This recipe for vegetable lasagna came to me through the usual channel – an email from a teacher at Dickinson State who I’ve neither met nor taken a class from. DSU staff tend to email things to everyone, which is part blessing and part curse. But the recipe was remarkably incomplete in that it didn’t say what the oven temperature should be, or how to precisely layer the thing.

There are a few things I did differently from the instructions:

After I was done, I did the world a favor and rewrote the entire recipe to reflect the baking temperature and what I think might be the precise layering of the lasagna. If you try this and have any changes to recommend, feel free to do so in the comments.

What’s the result? Deliciousness! The vegetables were cooked through, but the broccoli was nice and firm and the squash and zucchini were not mushy; to me, that’s a win. I enjoyed half of the lasagna, but Karisa only ate one piece (a quarter.) That was partly because she doesn’t eat as much as I do, but also partly because it turns out she might not have a taste for wilted spinach. We had this result when I made the spinach pie, too, so I might avoid so much spinach in the future.

At any rate, I consider this a success as a vegetarian dish. The picture looks like it was taken in the seventies and put on the menu board of a fast food restaurant; I wasn’t having any luck with that! The modified recipe follows that. 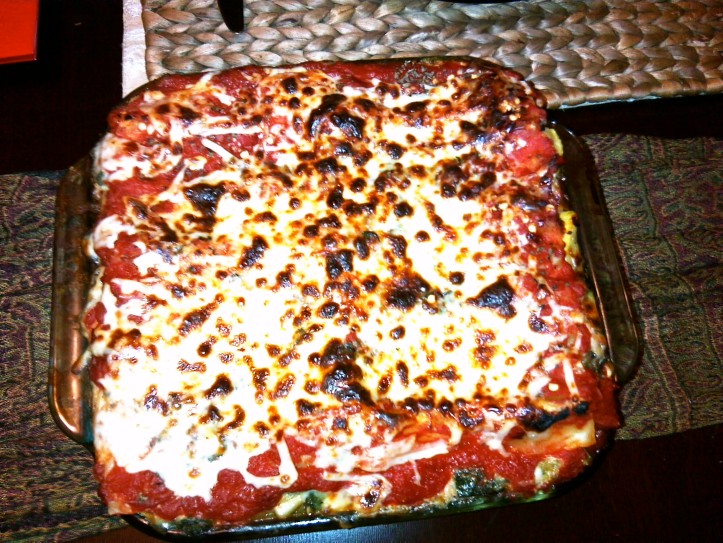